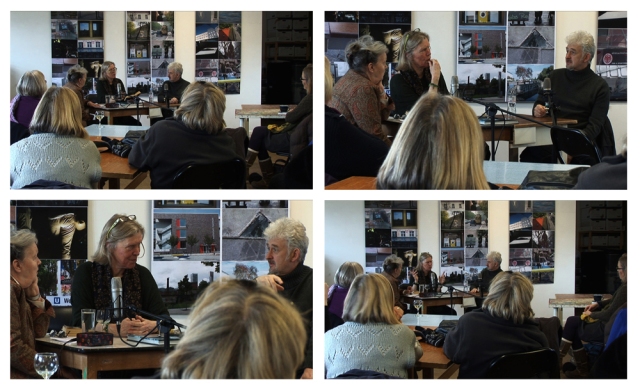 Eva Fahle-Clouts will be showing 4 Oder/Main/Tables, which she created together with David Rogers 2010 in the Peace Church in Frankfurt Oder. The installation commemorates the 20th anniversary of German reunification. The tables were exhibited in Frankfurt Main Zeil 2011 and in Frankfurt-Höchst 2012.  Two of the tables are still in Frankfurt Main, were one will stay, the other will be transported to Frankfurt Oder in April.

As part of the exhibition: Oder/Main/Tische at DIVAcontemporary in Bridport   Eva Fahle-Clouts has invited two special guests, Carina Stokes and Eric Harwood, to talk about I D E N T I T Y.

Carina Stokes is a counsellor who lives and works in Bridport. She is originally from Sweden and has lived in several different countries and cultures. She will present her personal views on identity coloured by her rich life and work experience.

Eric Harwood is a TV producer  who lives in Charmouth and works internationally.
He will talk about his current project  MEET THE IZZARDS which will be broadcast on February 20th and 21st on BBC1 (see also his article in Shoreline Winter 2013: Meet the Izzards – Meet Yourself) This project is about the amazing possibility our DNA presents to us.”We are all miraculous. It’s a little-known fact that under our skin we each carry inside of us the DNA of all our previous human ancestors, passed down the line like a personal baton in an unending marathon relay of family life.”